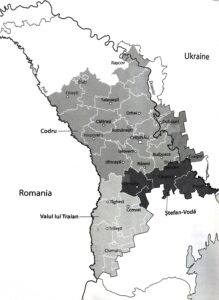 Does Moldova have wine PGIs?
Yes. In  Moldova are 3 regions accepted by EU in 2013.

MW Caroline Gilby (2018, p.289) in her book “The Wines of Bulgaria, Romania and Moldova” gives a fascinating description to Moldova’s PGIs and we thought to share it with you.

“Moldovans like to describe their country as roughly the shape of a bunch of grapes dropped into the map. It lies between latitudes 46 and 48°N, on the same latitude as Bordeaux, although it is climatically closer to Burgundy as it is much more continental. It’s a landlocked nation with Romania to the west, with the two countries separated by the River Prut along the whole boundary. Ukraine borders the country to the north, east and south. The Dniester runs along part of this border and between Moldova and the self-declared breakaway Republic of Transnistria. There is a small ‘coastline’ of a few dozen metres where the country’s southern tip meets the Danube to give it access to the Black Sea. The total area of the country is 33,670 square kilometres. It is a landscape of of gentle rolling hills, with its highest point reaching only 430 metres and an average altitude of 147 metres.
Moldova has three PGIs for wine, accepted by the EU in 2013. The area registered for PGI by the end of 2017 accounted for 8600 hectares.

Central (Codru) Region.
It is the area believed to have the largest overall vineyard area in the central region of Moldova.
2,258 hectares declared for PGI wines by 2017.
The region is noted for white grapes, but red varieties can also be grown in warmer microclimates.

Southeastern (Stefan Voda) Region.
The region in the south-east of the country is bordered by the Dniester.
There were 1,107 hectares declared for PGI wines by the end of 2017.
The region is particularly noted for red grapes.

Southern (Valul Lui Traian) Region
This southern part of Moldova is the warmest and driest region with 3,070 hectares producing PGI wines by the end of 2017.
Vineyards are on the slopes of the Dniester and Prut river valleys. The region is noted for red grapes, full-bodied whites and sweet red wines.”

PGIs gives the opportunity to highlight wines’ quality and properties that are significantly or exclusively determined by their environment, natural and human factors.
We are so delighted that Moldova produces high quality Wines with unique characteristics.